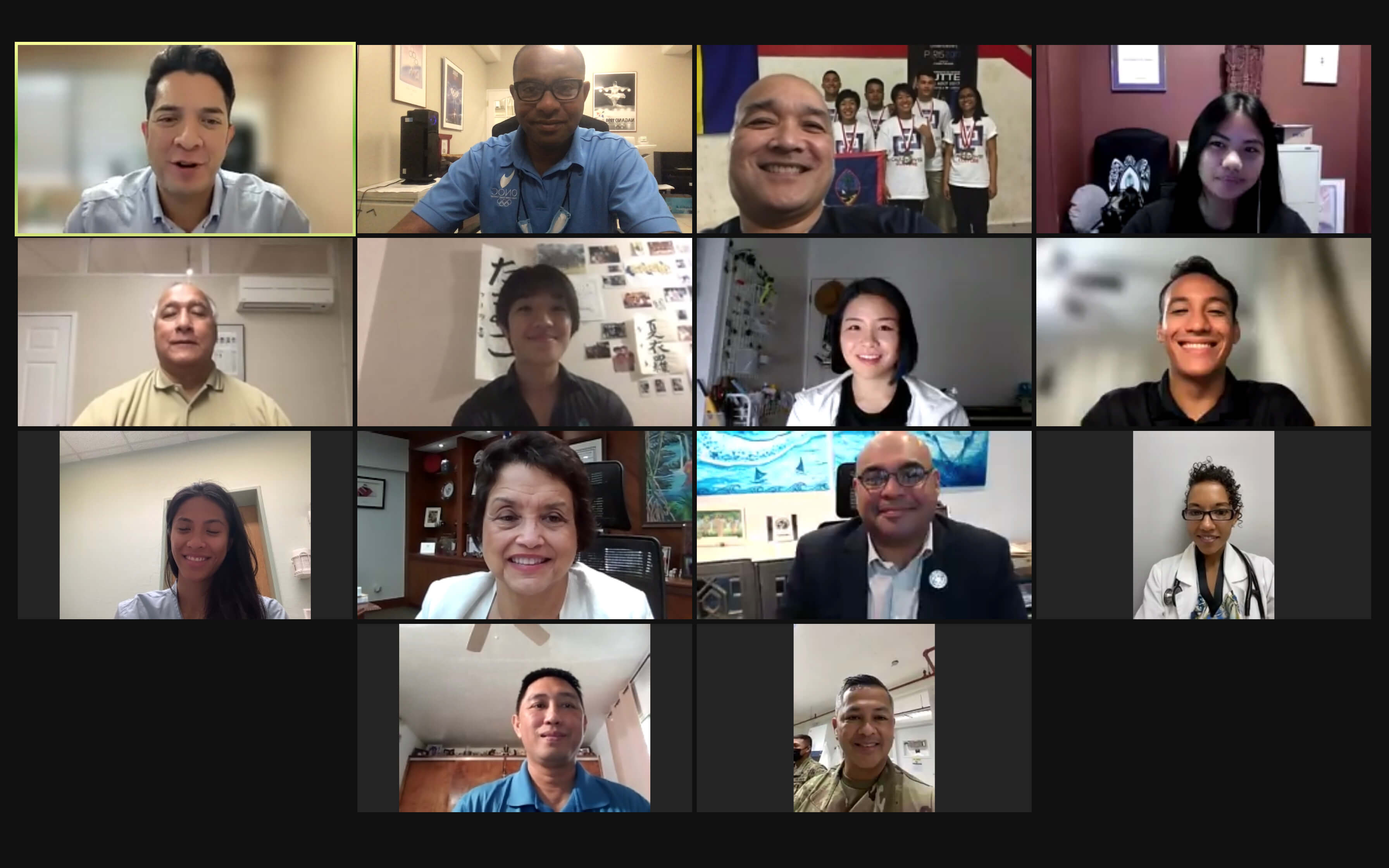 Team Guam’s delegation to the Tokyo Olympic Games were acknowledged for their representation, efforts and perseverance in a virtual ceremony hosted and streamed online by the Office of the Governor on Tuesday, 31 August.

“I am so proud and honoured to call you Olympians, as your experience preparing for Tokyo has certainly given you positive strength,” Governor Lourdes Leon Guerrero said in the presence of Lieutenant Governor Joshua Tenorio and officials from the Guam National Olympic Committee (GNOC).

“The values and principles you all hold as athletes are very impressionable,” she added.

“I know that against all the challenges you encountered in your preparations, you went there to do your best and you all did the best you could,” Gov. Leon Guerrero said.

Gov. Leon Guerrero commended the resilience of the International Olympic Committee for staging the Games in an unprecedented time.

“As you know, the Olympic Games was done to promote a camaraderie, to promote public relations, to promote political adherence, and to network with other cultures,” she reminded the athletes and officials.

Gov. Leon Guerrero also apologized to the swimmers Jagger Stephens and Mineri Gomez for not having a swimming pool they could access for training and mentioned discussions that are currently underway to construct two new swimming pools.

“I also want to say that we will do everything we can to support the Olympics,” she emphasized.

“We will try to get you as much as we can and the resources that you need to be able to train and to perform beyond what your level is.

“So, I encourage you to continue on and train towards the next Olympics,” Governor Guerrero stressed.

“You are all role models for Guam’s up and coming future Olympians.

“They will look up to you and read about your experiences.

“So I hope you will share you experiences with them so they can have the same kind of experiences and journey that you have had,” she told the athletes.

She commended the work of the GNOC, President Rick Blas and the roles of the officials who managed the team to Tokyo.

“I want to thank Joey Miranda III for being the head of delegation (Chef de Mission) and for taking care of our Olympians throughout their stay in Tokyo.

“I also want to recognise all the medical people that provided the support, and the necessary backup to ensure our athletes are physically stable.

“Dr Luis Cruz and Dr Arania Adolphson and also all the coaches that were able to participate.”

Gov. Leon Guerrero acknowledged the officials for helping Guam’s athletes in the most challenging Olympics that anyone could go through.

In adding to Gov. Leon Guerrero’s comments, Lieutenant Governor Joshua Tenorio said how very proud he was but also very sorry for not being able to be there in person in Tokyo.

He said the Games is based on partnerships.

“It’s based on peace and humanity and it was truly amazing to see the positive things that came out of the Games,” Lt. Gov. Tenorio said.

“The last thing I just want to say is, you probably don't know all the inspiration you are giving to the younger people on the island that are watching you on television competing in the Olympics.

“You are connecting our young people's aspirations to the dreams,” Lt. Gov. Tenorio concluded.