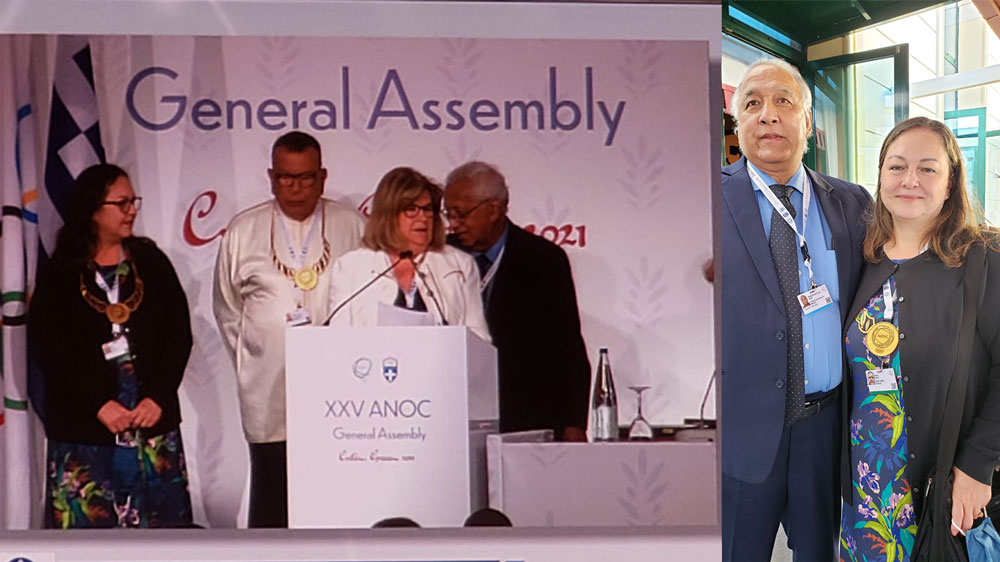 Blas’ tenure with GNOC began in 1992 when Cruz and President Ricardo Blas asked her to assist with the hosting of the 1994 Micronesian Games as a volunteer marketing consultant.  In 1995, she took over the role as Executive Assistant as the only temporary employee of GNOC on a rotational period with the money allotted to them through the IOC grant and sponsorships which would usually last for a period of nine months per year.  She authored the first rejection of an IOC sponsorship as she was able to find local support to fund programs on the island over the amount provided by the IOC.  With this, the IOC eventually recognized the funding prowess of the organization and provided an enhanced version of the sponsorship.

She was on board as GNOC made several relocations to different office sites beginning with the governor’s office to the Corn Building in Anigua in 1995 courtesy of former Senator Pete Perez which space incorporated two conference tables and chairs for the monthly meeting.  After the destruction caused by Typhoon Paka in December 1997, GNOC availed of the space provided by Sony Building in Tamuning and moved to the location in 1998 where she officially began her post as the Executive Director and assisted in the orchestration of the GNOC Bingo program in 2000.  From there, the office relocated to the Guam Hilton Resort & Spa in 2002 where they headquartered for three years.  In 2005, she assisted in flipping the OlympOceania grant for a property in Tamuning to eventually purchase our first building which included a house in East Espiritu Street and a four-unit Apartment where GNOC held office until 2010.  In 2009, the current office in Maite was purchased of which she worked with contractors in renovating during a six-month period until they were able to relocate.

Anita has been the leading office figure in GNOC’s organization as she chaired all aspects of fundraising and marketing efforts as well as compliance and Games preparation for the Olympic Games, Pacific Games, Pacific Mini Games, East Asian Games, Micronesian Games, Asian Indoor and Martial Arts Games, ANOC World Beach Games, and Asian Games.  She chaired the Guam Women and Sport Commission from 2012 to 2020 and held a Board post together with her current position from 2016 to 2020.  Ms. Blas was also Team Guam’s Chef de Mission for the Atlanta Olympic Games in 1996 and Athens Olympic Games in 2004.  She was also a member of ONOC’s Women and Sport Commission during its early years of the organization where she assisted in the creation of their original logo.  During the 1999 Pacific Games, Anita was involved with the organizing committee in every aspect, most especially in marketing and accreditation.

During her tenure, GNOC was able to host IOC President Juan Antonio Samaranch in 1998 and Thomas Bach in 2019.  She was instrumental in the hosting of the 2018 ONOC Women and Sport Commission Guam workshop, 2014 ONOC General Assembly at the Leo Palace Resort, 2007 IOC Women and Sport Administration course with Anita DeFranz at the Fiesta Hotel as well as numerous activities for the development of sport on the island.

The GNOC congratulates Mrs. Blas and wishes her continued success in the development and progress of the Olympic Committee programs.